Nama Sankeerthanam / Bhajan
Bhajans have evolved with a variety of methods over the years. These are known as paddhathis. It comprises of Thodayamangalam of Annamacharya, Geetagovinda of Jayadeva, Krishna leela tarangini of Narayana theertha besides the compositions of many saints of India. While Ashtapati of Jayadeva of Orissa took the prominent position in the bhajan plan, the Telugu compositions of Bhadrachala Ramadasa, Kannada compositions of Purandaradasa, sanskrit compositions of Sadasiva Brahmendra, Tamil songs frm Nandanar Charithram of Gopala Krishna Bharathi, Tyagaraja kritis, the Marathi Abhangs, Hindi keertans of Tulasidas, Kabir, Meerabhai's songs added a sense of unity among the bhajan singers.

The songs sung in the traditional south Indian Bhajan are usually simple melodies. All the three forms of Indian music (classical, semiclassical and folk forms) find a place in the south Indian bhajans. The Ashtapathis and Tarangams which form a primary part in the bhajan are sung with a brief naration of slokas preceding the song. The ability of the singer in narrating the sloka with his musical skill will produce the essence of the sloka absorbed well by the listerners. Following this the Ashtapatis are sung in chorus. Thus one can clearly find that the classical method of alapana comes over in the first art and simple melody rich semiclassical style prevails in the latter portion.

The Bhajan or so called naama sangeerthan has been accorded the highest importance in the bakhi marga adopted in kaliyuga. It helps focus the mind and brings peace ultimately.

Sri Venkatramana Desikar, popularly known as Sri Maruthanallur Sadguru Swamigal, traveled the length and breadth of our country in order to collect the compilations of many saints and devotees and made existing smapradhaya bhajan. 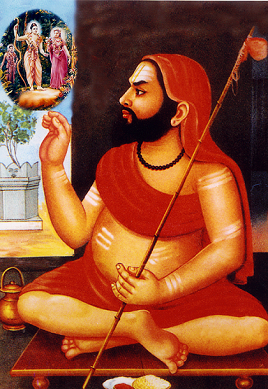 Bodhendra Saraswathi was a 17th-century Hindu pontiff and the 60th Jagathguru (head) of the Kanchi matha, Kanchipuram, Tamil Nadu, India. He spent his later life in Govindapuram.

Bodhendra was born to Kesavapanduranga Yogi and Suguna in the beginning of 17th century (in the year 1610)at Kanchipuram, which was then headquarters of Kanchi matha. The couple did not have children for a long time and believed that they were blessed by the devotion to Viswakendra Saraswati(Athmabodhar), the 59th Jagathguru of the Kanchi Matha. The child was named Purushotaman by Viswakendra Saraswati.

Seeing the extraordinary qualities and immense potentialities of the child, to render incalculable good to humanity, Sri Viswakendra Saraswati requested his parents to hand over the child to the Kanchi Matha with the pious hope of making the child succeed him. The parents willingly gave the child to the mutt. The child attained extra ordinary mastery over Sruti and the Smriti. It gradually dawned on him that nama sankeerthanam (chanting of Lord Rama's name) would fetter the cycles of death and birth in Kali Yuga. He chanted Rama nama(the name of Lord Rama) one lakh times every day.

Athmabodhar instructed Bodhendra Saraswati to proceed to Kanchipuram after obtaining Lakshmi Sreedhar's Bhagawan Nama Koumundhi from the author himself at Jagannatha Kshetram (Puri Jagannadh), and to compose a lakh of Bhagawan Nama slokas (sacred texts on lord) on the basis of Bhagawan Nama Koumundhi. The above-mentioned mandate of his guru (teacher) gave him a golden opportunity to pour out his devotion to Lord Rama and to vindicate the efficacy of Rama Nama (name of Lord Rama).

Bodhendra Saraswathi, during the course of his wanderings in the Cauvery delta was attracted by the beauty of the place and decided to attain samadhi or salvation at the spot. One morning, in the Purattasi (September–October) month of the year 1692, Bodhendra Saraswathi attained Jeeva Samadhi sitting in an yogic state. He attained Videha Mukthi at Govindapuram on Full Moon day in the month of Proshtapada of the cyclic year Prajotpatti (1692 AD). The Samadhi of Bodhendra Saraswathi is maintained by the Kanchi math. 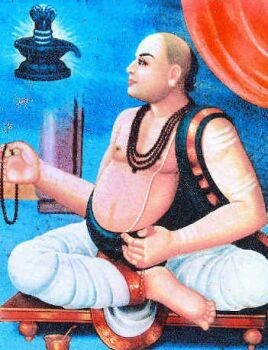 Sridhara Venkatesa Dikshitar (13-8-1635–1720), popularly known as Ayyaval, was a Hindu saint and composer who lived in the village of Thiruvisanallur in the then Thanjavur Maratha kingdom.

Very little is known about Ayyaval's ancestry or early life. According to some accounts, Ayyaval was the son of one Sridhara Lingarayar, a Brahmin who settled in Thiruvisanallur, during the reign of Shahuji I. Some accounts mention that Ayyaval's father was the Diwan of the Mysore kingdom. When Ayyaval, a staunch devotee of the Hindu god Shiva, was offered the post of Diwan upon his father's death, he rejected the offer and instead, chose to become a sanyasi or Hindu monk and embarked on a pilgrimage of the Saivite temples of the Cauvery Delta region.

On Ayyaval's arrival in Thanjavur, he was offered all assistance and respect by Shahuji, the then ruler of the Thanjavur Maratha kingdom. Shortly afterwards, he restored a Brahmin dead of snakebite to life and thus acquired a reputation as a miracle-worker. He was attracted to the Mahalingeswarar shrine at Thiruvidaimarudur and set up his house at the neighbouring village of Thiruvisainallur.

Various events are associated with the life of Sridhara Ayyaval. Chastised for feeding a hungry Dalit by orthodox Brahmins who insisted that Ayyaval should bath in holy Ganges and thus purify himself, Ayyaval prayed to Shiva and recited the Gangashtakam sloka appealing to the goddess Ganges. According to the traditions of the Sri Sridhara Ayyaval Mutt, when Ayyaval had finished reciting the Gangashtakam, water from the holy Ganges river flowed out of the well in his house.

Ayyaval outlived his wife and most of his contemporaries. He is believed to have died in 1720 at the age of 85. According to most accounts, he disappeared mysteriously while on a visit to the Mahalingeswarar Temple. Ayyaval's followers believe that on entering the temple, Ayyaval's soul entered the idol of the presiding deity, Mahalingeswarar, and became one with him. Sridhara Ayyaval was a contemporary of Sri Bodhendra Saraswathi and Sadasiva Brahmendra. Sadashiva Brahmendra's song Tunga Tarange Gange was written on Ayyaval who brought the Ganges.

He also holds an important status in Dakshina Sampradaya Namasankirthanam and is a member of the "trinity". Several songs have been written and composed on him and are always sung in any proper Namasankirthanam. The krithis are almost always followed by the namavali "Gangadhara Gangadhara", referring to Ayyaval as the bearer and bringer of the Ganges. 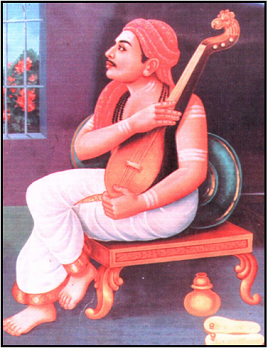 Sri Venkatramana Desikar, popularly known as Sri Maruthanallur Sadguru Swamigal, was born in the year 1777 at Thiruvisanallur. He lived in Maruthanallur Village, near Kumbakonam of Tamil Nadu. Sri. Sadguru swamigal is to be remembered ever as he was the one who took pains to formulate the ‘Sampradhaya Bhajan’ and popularise the same in the interest of human society.

He traveled the length and breadth of our country in order to collect the compilations of many saints and devotees and made existing smapradhaya bhajan.

Saraboji Maharaja was a disciple of him. Sri. Swamigal found out the ‘jeeva samadhi’ of Sri.Bhodendra Swamigal in a river at Govindapuram. On his request King Saraboji, diverted the river and developed Sri.Bhodendra Swamigal’s Jeeva Samathi. He lead his life as a parama bhagavatha. He made ‘Rama Nama’ mantropadesam to Sri. Tyagaraja Swamigal of Tiruvyaru. He practiced unchavirthi dharma daily. He attained muthi in the year 1817.